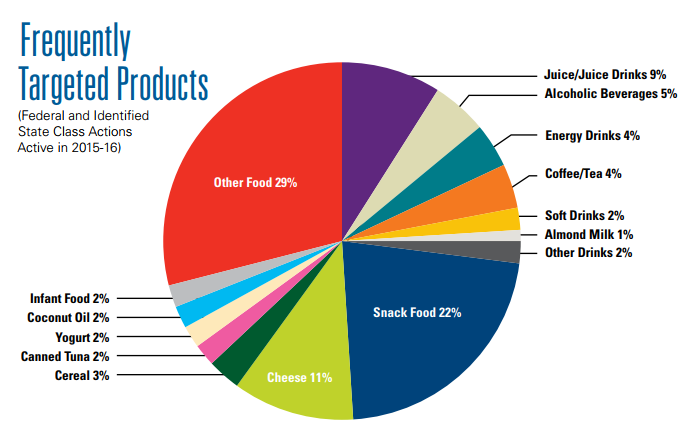 A new report from the U.S. Chamber Institute for Legal Reform fexamines the growth in litigation against food and beverage companies. | "The Food Court: Trends in Food and Beverage Class Action Litigation," 2/22/17

Illinois, specifically the Chicago area, traditionally has been home to some of the country’s most famous food companies and, even today, hosts companies that include Sara Lee, Wrigley, The Kraft Heinz Company and even Tootsie Roll Industries.

Unfortunately, the state also has become home to a growing amount of litigation filed against food and beverage companies, according to a new report from the U.S. Chamber Institute for Legal Reform (ILR).

The report findings show that Illinois is one of only four states in which three-quarters of all federal food class actions are filed. 7% of those class actions were filed in the Land of Lincoln, while 36% were filed in California, 22 percent in New York, and 12% were in Florida.

“If you eat, then you are probably a member of a class action,” according to the report, The Food Court Trends in Food and Beverage Class Action Litigation.

“In fact, it is likely that without your knowledge, plaintiffs’ lawyers have told courts that they represent you in dozens of lawsuits,” the report continues. “A close review of the litigation makes clear that the vast majority of these class actions result from lawyers shopping for cases, not consumer fraud.”

This doesn’t include the “many additional” suits filed in state courts, which ILR claims were “drafted to avoid removal to federal court under the Class Action Fairness Act.”

The most frequent types of suits were against companies who advertised their products as “natural”, as well as a growing number of suits targeting products labeled with “nothing artificial” or “preservative free.”

In addition, there has been an increase in so-called “slack fill” litigation. These lawsuits challenge “extra space” that might exist in product packaging. In 2015 and 2016, more than 65 such slack fill cases were filed -- a sharp increase from the only 10 cases filed in 2013 and 2014.

Food and beverage litigation, however, aren’t limited to these types of claims.

In 2016, Chicago gained notoriety as serving host to one of a number of high-profile lawsuits against Starbucks. In the Chicago case, a woman sued the coffee company for putting too much ice in their iced coffee. A similar suit, filed in Los Angeles, was dismissed last August.

Another case against Starbucks, filed by plaintiffs’ in California, alleging the company’s lattes are “25 percent underfilled”, became the source of a public dispute between the coffee company and NBC News investigative journalist Jeff Rossen and his “Rossen Reports” team.

“The official Starbucks menu in stores lists a grande latte at 16 fluid ounces,” reported Rossen. “Rossen Reports bought the same grande latte at six different Starbucks locations, then measured them in laboratory-grade beakers after allowing the foam to settle. The results were revealing.”

Starbucks dismissed Rossen’s findings, telling NBC News that the Rossen tests were "unscientific" and "without merit."

Rossen also has reported on the “natural” food label issue, and as recently as this morning reported on claims that candy companies “underfill” their boxes (i.e., “slack fill” litigation).

“These cases are about lawyers making money, not consumers,” said Rickard. “In these kinds of cases, lawyers make millions while only a very small percentage of consumers will see any money.”

In a video about the Starbucks lawsuits posted on ILR’s Faces of Lawsuit Abuse website, John Beisner, partner at the Skadden law firm, echoed Rickard’s statements, adding that these lawsuits could actually be costing, not helping, consumers.

ILR’s report findings give merit to Rickard’s and Beisner’s statements finding that, in certified class actions, “about half of the settlement money often goes to the lawyers who bring the case for their fees and costs, and to pay the cost of claims administration.”

“While plaintiffs’ lawyers receive millions in fees, consumers are usually eligible to seek a nominal cash payment, product vouchers, or products in the mail,” according to the report.

Rickard said that Rossen’s story -- and her organization’s report findings -- show that legislation is needed to fix the problem.

“NBC’s segment is further proof of the need for class action litigation reform now headed to the floor of the U.S. House,” said Rickard, referring to the Fairness in Class Action Litigation Act of 2017 (H.R. 985).

That bill, which has passed the House Judiciary Committee, was introduced by Judiciary Chairman Bob Goodlatte (R-VA).

“Class action lawsuits should pay consumers first, not the lawyers,” added Rickard. “If the feeding frenzy on food marketing class actions continues, consumers will pay the price – including higher costs for candy at the movies.”