The latest Ferguson affront, according to the Chicago Fraternal Order of Police (FOP) blog The Watch, is his scheduled appearance at a panel discussion hosted by Injustice Watch, the journalism project founded by Rob Warden, former head of Northwestern University’s Center on Wrongful Convictions. The discussion, “Know the System: Policing And Transparency,” is scheduled for Sept. 23 with Justice Watch reporter Emily Hoerner and Maira Khwaja of the Invisible Institute, the South Side “Journalism Production Company” that holds “public institutions accountable.”

No one from the CPD is scheduled to appear. 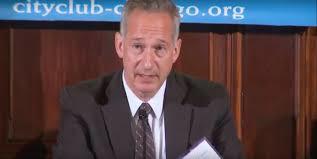 “Rest assured there will not be much arguing on behalf of the police by Hoerner and Khwaja,” FOP spokesman Martin Preib wrote in The Watch.

Preib also called out Ferguson for not heeding the pleas from the FOP that the city fight and not settle certain wrongful conviction cases; evidence is now being unearthed that some of the wrongful claims by CWC, especially those associated with former Northwestern professor David Protess, are unraveling.

“While Ferguson has served as Inspector General, the Fraternal Order of Police has argued for several years that this pattern at Northwestern must be investigated and that the city should not settle any civil lawsuits originating from the school until such an investigation is completed,” Preib wrote.

Finally, Ferguson’s office, while conducting what it characterized as an administrative investigation into the 2014 shooting of 17-year-old Laquan McDonald, drummed up evidence that three officers conspired to cover for officer Jason Van Dyke, who shot and killed McDonald. Initially cleared, Van Dyke was later convicted of second-degree murder.

All three officers were later acquitted of all charges.

But Ferguson was a “Technical Adviser” on the Police Accountability Task Force, which issued its findings on the McDonald shooting in 2016. Preib wrote that the Task Force’s report made findings about the legitimacy of the shooting before it was even investigated by any outside entity.

Ferguson’s office did not respond to a request for comment.

Want to get notified whenever we write about Chicago Police ?

Sign-up Next time we write about Chicago Police, we'll email you a link to the story. You may edit your settings or unsubscribe at any time.