Taxes will continue to rise until there is pension reform, says WFLD Fox president and GM

WFLD Fox 32 Chicago President and General Manager Dennis Welsh did not mince words about the perilous place Illinois’ growing pension crisis has left the state in during a recently aired editorial on the network in which he predicted voters are primed for revolt given anything short of pension reform.

“Sadly, Illinois pension reform has been put on the back burner by House Speaker Mike Madigan for the past 30 years in exchange for government union backing to keep him in power,” Welsh said in the editorial. “This anti-taxpayer scheme has us paying the country’s highest property taxes while the political elite and government unions enjoy the most lucrative pay in all of America.”

In her first State of the City address, Chicago Mayor Lori Lightfoot shared that the city now has a projected $838 million budget deficit for the fiscal year beginning Jan. 1, with most of the shortfall caused by still-rising pension debt. The new mayor is scheduled to provide her revenue-raising plan for filling the gap sometime in October, though NBC Chicago reports that Lightfoot has already hinted she doesn’t think more taxes on the backs of overburdened city residents is the way to go. 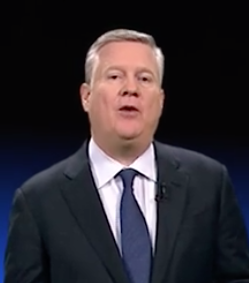 Welsh said that taxpayers can only hope Lightfoot meant what she said.

“Our only hope now is our new governor and new mayor,” Welsh said. "So far, J.B. Pritzker and Lori Lighfoot are siding with Madigan instead of taxpayers by saying they have no interest in changing the constitution even though it is the only hope to keep taxes from going up further. It all boils down to this: Taxes in Chicago and suburban towns are going up again unless Illinois legislators address pension reform immediately.”

Welsh placed most of the blame squarely on the shoulders of Madigan.

“All because he simply refuses to change a ridiculous pension clause in the Illinois Constitution,” Welsh said. “That clause says the retirement benefits enforced on a government employee's first day of work can’t be changed for the rest of his life. This means things like a 3-percent cost-of-living increase can never, ever be reduced. This is why 65 to 90 percent of every new tax dollar goes to pensions – absolutely unsustainable.”

Welsh added that the current situation more than explains why so many people are fleeing the state and why a recent Realtor.com report identified the Chicago market as the second worst place to own a home in America.

“My hope is that the absurd government pension crisis, higher taxes and crashing home prices will absolutely cause a revolt at the ballot box,” Welsh said.

Want to get notified whenever we write about WFLD Fox 32 Chicago ?

Sign-up Next time we write about WFLD Fox 32 Chicago, we'll email you a link to the story. You may edit your settings or unsubscribe at any time.