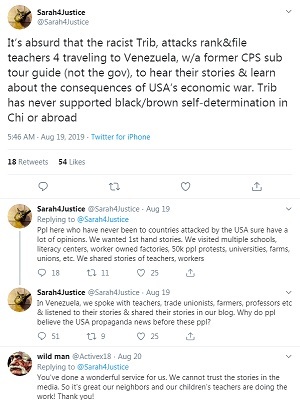 Few special education teachers have ever passed through days like Sarah Chambers experienced this week.

Perhaps the controversy of has been too much for the Maria Saucedo Scholastic Academy special education teacher and Chicago Teachers Union Executive Committee member to discuss, at least not with Chicago City Wire.

Chambers, who journeyed to Venezuela earlier this summer with other Chicago area educators as part of the "CTU delegation" who praised that nation's socialist leader - and was all but disavowed for their troubles by union's President Jesse Sharkey  -- did not respond to a Chicago City Wire request to discuss the controversy from her perspective.

Chicago City Wire also asked whether Chambers would do anything different regarding the crowdfunded trip that landed her and other members of the "delegation" in so much hot water. Chicago City Wire also wanted to know whether Chambers agreed with longtime Chicago Public Schools teacher Karen Moody, a critic of the Venezuela, that Sharkey should apologize to teachers, students and other Chicagoans of Venezuelan descent for his dismissive response to the controversy.

Chicago City Wire and Wirepoints broke the story in late July. The Chicago Tribune and national news outlets such as the New York Post and The Blaze added their voices to the controversy this week, significantly turning up the heat.

Byrd-Bennett was later sentenced to 4 1/2 years in prison while Chambers field a lawsuit against the Chicago Board of Education in federal court, alleging retaliation.

The union wholeheartedly defended Chambers at the time but this week it appears to be wishing everyone would forget about the CTU delegation's trip to Venezuela -- or at least not let it distract from ongoing contract negotiation.

“I would say to the people for and against Venezuela, please stop; it’s not where we need to be going right now,” Sharkey told WTTW.

The delegation's praise of Venezuelan President Nicholas Maduro, who presides over a well-documented humanitarian crisis in that country that has millions fleeing, including many of who have ended up at the U.S. southern border seeking asylum.

The CTU delegation told a different story about what they witnessed during their tour of Venezuela, blogging on Radical Educator Collective with glowing reports about a nation enjoying "justice and love" under Maduro.

The blogs, unlike a variety of Twitter, Facebook and other online media posts by members of the CTU delegation, have not been taken down in the wake of this week's controversy.

In her blogged contribution on Radical Educator Collective, Chambers warned of a conspiracy to undo Maduro's election to succeed the late Hugo Chavez.

"Unfortunately, not everyone is happy with this new democratic process," Chambers wrote in her blog. "The opposition wants to return to the way elections were run before Chavez, to disenfranchise poor black and brown voters once again."

Which may be why Chambers slammed the Chicago Tribune's coverage of the CTU delegation's Venezuela trip as "racist."

"[The] Trib has never supported black/brown self-determination in Chi or abroad," Chambers said in a post to her Twitter page Sarah4Justice.

CTU's membership appears split over the delegation's trip and the controversy.

“What these delegates are saying is not true," Rebecca Testa-Ryan, a CTU member whose family suffered under Manuel Noriega in Panama during the 1980s, told WTTW. "It's unfortunate because it's unethical, unprofessional and it doesn't represent everybody in our union. Many members are distraught about this because it reflects on us. This is not our political philosophy and not how we treat people enduring pain.”

The Illinois Venezuelan Alliance, likewise, does not want what the CTU delegation alleges to have seen in Venezuela to become the union's view and said so in a letter to Sharkey dated just after Chicago City Wire and Wirepoints broke the story. In its letter, the Illinois Venezuelan Alliance urged urged rejection of a union resolution passed in March and the CTU delegation's trip.

On the latter point, the alliance expressed concern at how the delegation received visas to make the trip.

"Of special concern is the fact that a CTU delegation - paid with 'taxpayers' funds - obtained Venezuelan visas directly from the Maduro’s regime and traveled with a sole purpose: to serve as the propaganda disseminators of the cruelest regime that the country has endured historically," the letter said.