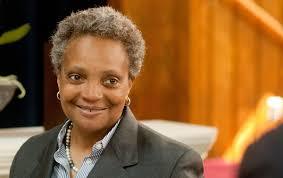 Chicago Mayor Lori Lightfoot is “cut from the same cloth” as her predecessor Rahm Emmanuel for diverting attention away from the city’s tragic distinction of having more homicides than New York and Los Angeles combined, writes native Chicagoan Gianno Caldwell, a political consultant and Fox News political analyst.

In a column published Sunday in the New York Post, Caldwell called out Lightfoot for telling President Trump to butt out of the city’s business when the president, speaking  at the International Association of the Chiefs of Police Conference in Chicago two weeks ago, cited the lack of leadership in stemming the violence.

Caldwell called out the local press as well.

“In response [to Trump’s speech], Chicago’s mayor suggested Trump focus on issues in D.C., and the liberal press touted the decrease in violence in Chicago in some apparent attempt to prove how out of touch Trump is,” Caldwell wrote. “The decrease?  Through the end of October, there have been 2,242 shooting victims and 424 murders in Chicago. Last year, we had 2,462 shooting victims and 478 murders over the same period.”

Lightfoot, says Caldwell, has taken right up where Emanuel left off; he called Emanuel “nothing more than a failure” in his time as mayor from 2011 to 2019.

“He offered only promises, higher taxes, and a ‘sanctuary’ for everyone but the – mostly – African Americans bleeding in our streets,” Caldwell wrote. “He and the local Democratic leadership sought to decrease gun violence only via stronger gun laws. Catapulting Illinois gun regulations to among the very strictest in the nation. (Someone should have warned Emanuel that criminals don’t obey the law.)”

The police themselves have fallen victim to diversionary tactics of elected officials.

In March, the Chicago Police Department (CPD) was placed under a consent decree after an investigation by President Barack Obama’s Justice Department found the CPD’s use of force racially discriminatory. Heather MacDonald, author of “The War on Cops: How the New Attack on Law and Order Makes Everyone Less Safe,” called the Justice Department’s report “shoddy.”

“That report lacked the most basic statistical integrity and transparency; it failed to disclose any data that justified its conclusion,” MacDonald wrote in 2017. “The feds recycled fabricated calumnies about the department, such as the outrageous claim that officers in Chicago do not care about solving black-on-black crime. It found police racism through the usual trick of ignoring crime rates.”

Caldwell says that city leaders must move beyond “Trump’s not welcome in Chicago” approach, and other partisan diversions, and confront the reality of the violence. He also said that more research is needed into gun violence – it’s in the top 30 of causes of death in this country but one of the least studied.

“The lack of research condemns policymakers to remain ignorant about many aspects of gun violence, including the most effective ways to reduce violence,” he wrote. “There are thousands of studies waiting to be performed, and more than 100 medical organizations have beseeched Congress to restore funding for this research. We must add our voices to that demand.”

Want to get notified whenever we write about Chicago Mayor Lori Lightfoot ?

Sign-up Next time we write about Chicago Mayor Lori Lightfoot, we'll email you a link to the story. You may edit your settings or unsubscribe at any time.