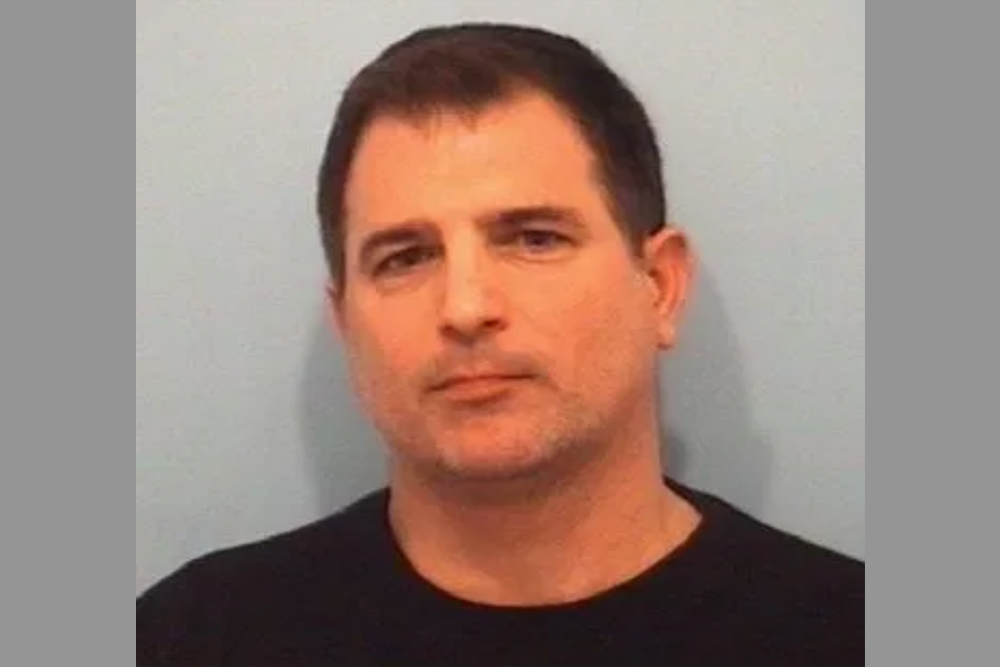 Dave Savini mugshot from a 2014 arrest for battery, child endangerment, driving under the influence and leaving the scene of an accident. | Naperville Police Department

Flight attendant and author Kathy Browne, 50, told police in July 2016 about a series of messages she had been receiving from Savini – in one he allegedly asked Browne if she wanted a “picture of his penis.”

“She stated this in an ongoing problem for a about a year and asked Dave Savini to stop contacting her,” the police report said.

Browne told Chicago City Wire that she also contacted CBS 2 about the matter.

“It was frightening,” she said.

Browne, who was living in Chicago at the time of the police report, said that she and Savini had met professionally ten years before. They went on one date seven years later; she immediately wanted to break it off. The messages began after that. Browne describes herself on Amazon.com as “a sober coach and an outspoken advocate for addiction and recovery.” She is the author of "My Emerald City, When Growing Up Grunge Is A Killer."

Savini did not return email or voicemail messages seeking comment.

CBS has a history of complaints over its treatment of women, according to a recent Los Angeles Times investigative report on the “culture of fear, entitlement – and little accountability” within the network.

Besides discrimination complaints against CBS-owned Los Angeles stations others have surfaced in Chicago, Dallas and Miami, the Dec. 8 report said.

“In 2000, the company paid $8 million to settle a lawsuit brought by the EEOC, the government agency that polices workplace law compliance,” the report said. “The agency found that women at seven CBS TV stations, including KCBS, endured a hostile work environment that included sexual harassment and retaliation for complaining. About 200 female technicians at CBS stations — camera operators and engineers — were paid less than men and passed over for promotions, the EEOC found.”

Savini has been embroiled in controversy in his off-camera life before. In January 2014, he was arrested in Naperville for battery, driving under the influence of alcohol, and endangering the lives of two teenagers, according to reports. On the battery charge, he allegedly shoved a driver in a Taco Bell parking lot when the driver, after a fender bender, tried to take a photo of Savini’s license plate. Savini left but was arrested later with a blood alcohol content of .134. The legal driving limit is .08.

John Greenfield of Streetsblog Chicago called Savini a hypocrite for later filing a petition to rescind the Illinois statutory summary suspension that would automatically kick in 45 days after the arrest.

“Back in 2003, the investigative journalist ran the series “Code Blue, Code Red,” which found that 250 local cops, firefighters and paramedics had committed drunk driving offenses, on WMAQ-TV,” Greenfield wrote. “Savini won the prestigious Edward R. Murrow award for his efforts.”

“It takes a lot of brass to turn around and try to keep your driving privileges,” Greenfield wrote.

Savini pleaded guilty to DUI in February 2014. The other charges were dropped.

Savini has won numerous awards for his reporting since joining CBS in 2004. He’s also made enemies with the Chicago Police.

In August 2018, the Chicago Police union’s spokesman, Martin Preib, called out Savini in the FOP blog, The Watch, for his reporting on a 2013 case involving an injured police officer. In the case, a driver was charged with attempted murder of the police officer but then later sued the police for false arrest and excessive force.

The officer, Michelle Murphy, who was dragged under the woman’s care, was hospitalized with broken ribs, cuts, and back pain. Charges of attempted murder were approved by Murphy’s supervisors and then by the Cook County State’s Attorney.

Preib wrote, “Here is what Savini said about the traffic stop: 'A woman with two small children in her car tried to pull into her driveway. That simple task ended with Chicago police officers pointing a gun to her head and charging her with attempted murder.'”

A judge later ruled that Murphy and her partner had probable cause to stop Brown in the alley, as she had committed two traffic violations.

In the same blog post, Preib also cited Savini’s coverage of the Ford Heights Four case, where four men were exonerated for the 1978 rape of a woman and for her murder and her fiancé’s murder through the efforts of Northwestern University professor David Protess.

“Protess left the University in a scandal in 2010 after the school admitted he had lied about his investigations,” Preib wrote. “Since then, a litany of accusations against him and Northwestern have unfolded, including allegations of misconduct in the Ford Heights Four case.”

Want to get notified whenever we write about CBS 2 Chicago ?

Sign-up Next time we write about CBS 2 Chicago, we'll email you a link to the story. You may edit your settings or unsubscribe at any time.